While Moncton has a small-town atmosphere with a population of 120,000, it’s a very competitive real estate market. In it are all the major real estate brands vying for business. But Parise is eager to compete, and with a total market share of approximately 25% across 78 agents, she’s established her office as a force to be reckoned with. “I’m very proud and sometimes marvelled by all that we’ve accomplished,” says Parise.

At the turn of the century, Parise was working as an agent with Realty World, which was acquired by Royal LePage. In her first year selling real estate, she became Rookie of the Year for Atlantic Canada. It was around that time she noticed a newcomer to the industry, EXIT Realty, founded a few years prior in 1996. “I don’t know if all sales are that easy, but I was sold the moment I heard EXIT’s story,” says Parise. She then opened her EXIT Realty Associates office in 2000. “It didn’t scare me that I didn’t have experience running a brokerage. I was so focused on helping others and growing my business that I didn’t have time for self-doubt. I was sold.”

Parise found it difficult attracting experienced REALTORS® as an up-and-coming franchisee, so she made it her mission to train and mentor new agents and mold them into top-tier talent. “André Malenfant is one of my secret weapons. He’s a picture-perfect manager and has been with me since the beginning,” says Parise.

André hosts training sessions twice a week in their office. The schedule is set seasonally and tailored to the wants and needs of their agents. Training involves lots of roleplaying with André acting as a tough buyer or seller. “I must have been an actor in a past life,” says André. “Roleplaying is a great way to apply and assimilate new information. We should practise on each other, not our clients.”

Training sessions are broken into three parts. It begins with each person sharing a positive real estate story or experience. “Knowing they have to have a happy story keeps them focused on positivity,” says André. Next, each agent submits a recent real estate challenge as a topic for discussion, from which other agents can learn. The third and most significant part of training is spent on a predetermined topic. The curriculum includes scripts for canvassing business, being assertive in negotiations, growing a listing inventory, dissecting purchase and sales agreements, building a sphere of influence, and the effective use of social media. “Social media can be very powerful. One of our new agents had fifteen deals in one year that originated through Facebook,” says André.

Positivity is an essential element EXIT Realty Associates’ reputation. Agents are instructed to always be competitive but cooperative with other agents and offices in their marketplace. They are never to put a competitor down. “We find success comes easier if we have healthy, respectful relationships with everyone,” says André.

“Success didn’t happen overnight,” says Parise. “We set out to never stop growing or learning, and to always do better than the previous year.” Parise was honored at EXIT’s Annual Convention as the company’s second highest grossing single office in 2019, having previously been third in 2018 and fourth in 2017. It’s through strong leadership that Parise and EXIT Realty Associates maintain their extraordinary trajectory.

“I wanted to build a business that honors positive participation, production, and success,” says Parise. “EXIT has the best system because it promotes the passing down of wisdom instead of the typical competition you find in the industry. And I believe the more people you help, the better you become.”

Parise Cormier was recently interviewed by EXIT’s Director of Leadership, Bob McKinnon, for his exclusive podcast, Leader’s Path. To listen, associates can access Leader’s Path through the Resource Center.

EXIT Brokers interested to learn more about the training held at EXIT Realty Associates can watch the 30 Minutes to Greatness Broker Webinar with André Malenfant. 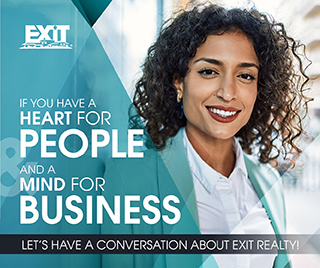