Every decision we make and action we take creates a ripple, not just in our own lives, but the lives of others.  No other real estate company touches as deep as the ripples of EXIT Realty.

Having her real estate license since the 1980’s and owning a consulting firm with her husband, David, Franchisee, Debbie Myers had seen the real estate story written the same way many times, but it was her choice of EXIT that changed the narrative not just in her life, but that of three other women.

“I’d worked for other companies throughout my career,” she recalled. “I knew who I wanted to be involved with and who I didn’t, and I really liked the idea of EXIT. It’s a good fit with my personality and my values, and I’m so happy to be here.”

Where she took the supportive role in their previous business helping large-scale performance improvement initiatives at many leading global firms, including more than 30 Fortune 500® companies, Debbie took the reins of their EXIT Compass Realty franchise, with a strategic and steady approach to growth.

“I started from ground zero. I had no agents, just me,” she admitted, “You can’t just open new doors; there’s a lot that goes on behind the scenes. So, I did take the first couple months to put my infrastructure in place. The good news was I did have employees from my previous business who helped me, so I had graphic designers and administrative help to get set up, but they didn’t have a real estate background.”

To help jumpstart her growth and reach the 20-agent count she has today, Debbie would hire a recruiter out of the gate named, Lisa Hagerman, who would be the first of the women her EXIT decision would impact.

“I decided that I needed the extra help early on, to build up a few core agents, who would then bring in more agents,” Debbie shared as a tip for those who are also starting out alone. “If you can afford it, that’s really a key area in which to have help.”

With EXIT’s multi-faceted business model, and Formula of single-level residual income, both Debbie and Lisa began their sponsoring journey together. Sadly, Lisa passed away shortly after, but not before making her daughter the second woman impacted by Debbie’s decision to join EXIT. Lisa named her daughter as the beneficiary of her sponsoring bonuses, which subsequently convert to beneficiary benefits.

“Lisa’s daughter Shelly is still getting residuals, which is really nice. I talked with her and she’s just so appreciative. She’s in her late twenties, and though you know it will never replace her mom it’s something that’s cherished and quite helpful,” Debbie said.

Parents themselves, Debbie and David already had two adopted children whom Debbie was homeschooling while helping to grow their consulting firm, when they had the opportunity to adopt Mandy. She was around the same age as Lisa’s daughter when she took a keen interest in the real estate business; the third woman impacted by Debbie’s decision. “She’s a self-starter who learned a lot of self-discipline through competitive horseback riding. Port Charlotte, Florida is an area where you’re either retired or on vacation and there are not as many prospects here as in a big city. I think that real estate was a great career opportunity for Mandy where a lot of her friends, even out of college, are still waiting tables.”

Debbie is proud of her consumer centric office, where core values and personal attention set her apart from the competition, and though she hopes to one day double her agent count, she really just wants to be freer to be of more service to them when needed.

“That’s one thing I like about EXIT. We say that we’re interested in people not numbers, and that’s really my goal. I want anybody who comes into my franchise to be successful. I don’t want to just make money; that’s not my priority. I want to make sure that everybody’s taken care of, coached, and helped in the ways they need to be helped, including our customers,” she says. “When David and I ran our other company, we had a satisfaction guarantee and I wanted to carry that over to the franchise. We really go out of our way to make sure that the customer or client is satisfied. Everybody says they want to exceed expectations, but thanks to our and EXIT’s values, I think we really do.” 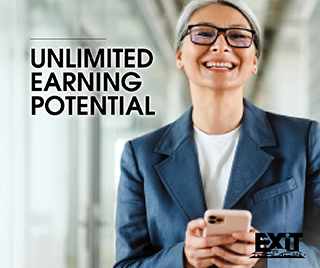