Go Your Own Way

The newer generation real estate professional has a team spirit like no other before. It’s true teams can help build careers in those tough early years, but what happens when you stop seeing eye-to-eye with your team?

Mikhail Myles was 25 years old and working in insurance after graduating college when his friend and Sales Representative, Troy Davis, introduced him to EXIT Realty. Having come from a large family of nine with real estate parents, Mikhail was familiar with the business, and after one meeting with Troy he said, “I knew real estate was the career for me, and EXIT was the company for me.”

The option of becoming a part of a team was there from the moment he joined EXIT Realty at Home in East Lansing, Michigan. In fact, both his Broker, Heather Driscoll and team leader would share with Mikhail how they got their starts with teams.

“As they were the top two sales leaders in our office…and both agreed it was the best decision they made, I decided to follow suit,” he explained. But a year later he would realize just how important it is to know what’s right for you. “My team leader told us he’d be moving to <another company and> wanted us to come with him. He explained that our splits would be a lot higher, and the company had a lot more to support us. After the switch I quickly learned that was not the case.”

Four months into this new team arrangement, and full of regret, Mikhail made the hard choice to go his own way. After being told he would never make it on his own, he was apprehensive about returning to Heather and the rest of the office, but in true EXIT fashion, they welcomed him back home with open arms.

“What brought me back to EXIT was the family atmosphere,” Mikhail admitted. “I haven’t been in a work environment like our office has. We’re a group of young, highly motivated individuals that just want to grow our business together and have fun while doing it. I knew coming back I was going to be taken care of and I knew it was the best place for me.”

To say Mikhail is thriving since returning to his EXIT family is quite the understatement. He has grossed over $100,000 as a solo agent and is decidedly not joining another team. He sees his life-long real estate career ahead of him, full of investment and sponsoring potential saying, “I’ve learned it’s a job where your income has no cap, but you won’t get to where you want to be if you don’t put in the work.”

Previous articleHECM Loans: Not Your Grandmother’s Reverse Mortgage
Next articleSteven Gourley and the Spirit of EXIT Tee Off for Habitat 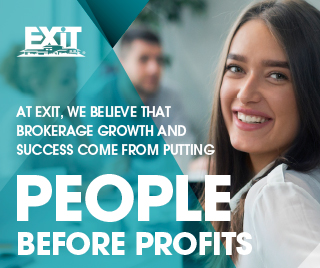